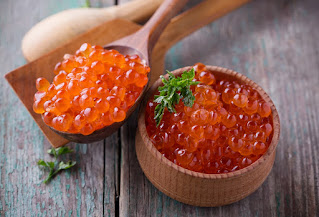 Salmon, in particular, is known as one of the most nutrient-dense foods on the planet. Apart from having a high content of omega-3, the fish is rich in protein, B-vitamins, selenium, magnesium, and potassium as well. Salmon roe is a flavorful, nutrient-rich food that is served in a variety of ways. Consumption of salmon roe may promote fetal neural development and reduce the risk of developing Alzheimer's disease in adults. A diet full of fresh fruits and vegetables, a portion of seafood, and increased consumption of nutrients including omega-3 are beneficial to maintain overall health.

Salmon roe (sometimes referred to as "salmon caviar") is the internal egg mass found in female salmon. Consumption of salmon roe is growing in popularity. For some people, however, an appreciation for any type of roe is an acquired one, due to the tiny eggs' unique texture and briny flavor. In particular, they burst with an audible “pop” between the tongue and the roof of the mouth, releasing the lightly flavored contents. Compared to the roe of other fishes, salmon roe has a considerably larger egg size, conspicuous pop, and mild, sweet finish, faintly reminiscent of salmon. It is served in a variety of dishes, including sushi and pasta, or as a garnish or condiment to seafood or eggs.

Benefits
A preferred source of omega-3 DHA for the brain, and reduces Dementia and Alzheimer’s disease.
Recently, emphasis on dietary approaches has revealed that eating food rich in omega-3 fatty acids can be beneficial for brain health. Research conducted by the Journal of Alzheimer’s Disease confirmed patients with high levels of omega-3 had improved blood flow in specific areas of the brain. Results showed a significant improvement, especially areas of the brain that were responsible for memory and learning – that are usually distorted due to age and dementia. In short, the study showed a lot of positive relationships between Omega-3 fatty acids, brain perfusion, and cognition. Dementia affects the lives of nearly 50 million people worldwide, a number expected to triple by the year 2050. Fish that contain excess amounts of omega-3 fatty acids, such as salmon, mackerel, and tuna also reduce the risk of heart attacks, decrease inflammation, and treat asthma. Since our bodies are unable to produce omega-3 naturally, we should consume foods that are rich in these fats to reap the benefits.

Omega-3 and children
Omega-3 fatty acids are critical for fetal neurodevelopment and pregnant women have always been advised to take at least 2 servings of oily fish per week. Since they are so important for early brain development, the omega-3 content is automatically added to babies’ milk formula. Several studies have shown that mothers who regularly eat fish during their pregnancy have better social and verbal skills when compared to those who never ate fish. Researchers have also claimed that many brain-related illnesses can be prevented in old age by keeping a good intake of omega-3 fatty acids in early childhood – and even in the womb.

Besides salmon and other oily fish, omega-3 fatty acid is also available in adequate amounts in nuts, beans, anchovies, egg yolk, and blueberries.

Processing techniques for salmon roe vary according to the intended final use for the roe and include brining (the most common), curing, marinating, or fermenting. These processes greatly enhance the food safety profile of salmon roe and can guide consumers' decisions about which salmon roe products to purchase for optimal quality and safety.

Salmon roe processing typically occurs under very stringent safety procedures to reduce the risk of potential contamination. The egg mass is sometimes left intact, or the mass can be separated and processed as individual eggs. Shortly after the eggs are removed from the fish they are graded based on freshness and size. Freshness dictates the eggs' firmness. Higher quality eggs are inherently firmer, require shorter brining time, and are less salty. Less fresh eggs are softer and require longer brining (which firms the eggs), and the end product is saltier. After grading and sorting, the eggs are brined (during which foreign matter is separated from the eggs), and then packaged. Part of the packaging process of frozen roe typically involves a nitrogen gas flush that displaces the oxygen and seals the package. This allows the eggs to be stored in the freezer for several months and prevents oxidation of the omega-3 fatty acids they contain. 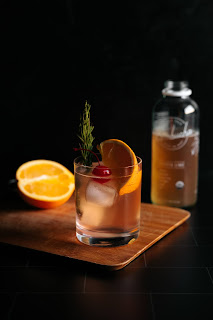 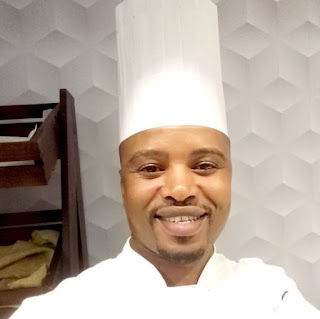 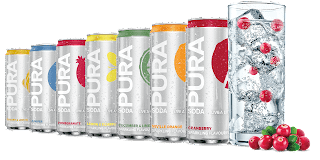